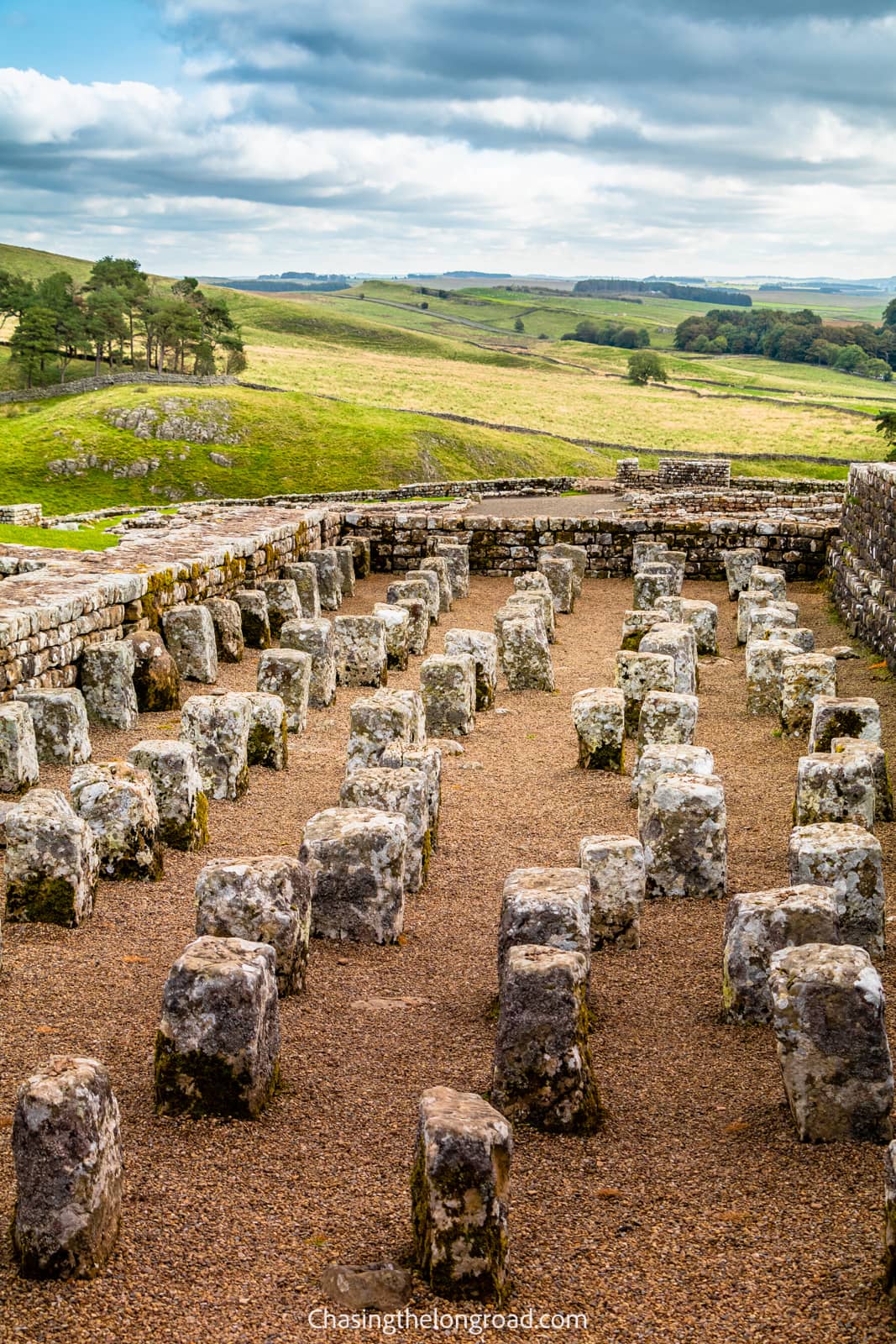 Hadrian’s Wall is a UNESCO World Heritage site – a must-visit place while you are in northern England. In AD 122, during the reign of Roman Emperor – Hadrian, the construction started to build this 73-mile long Roman fortification. This coast-to-coast frontier stretched from Wallsend (about 4 miles east of Newcastle) to Bowness-on-Solway, west of Carlisle. It took almost 6 years to build Hadrian’s Wall by almost 15,000 men.

If would like to walk the entire stretch, it would take around 10 days depending on your fitness level. Arguably, the most scenic part of Hadrian’s Wall is from Hexham to Haltwhistle which would take about 5 – 6 hours to walk.

How to get to Hadrian’s Wall:

By Public transport: Hexham and Haltwhistle on the Hadrian’s Wall are the two places that have good connectivity with other cities in the UK via Carlisle and Newcastle. Bus AD122 runs hourly between Haltwhistle and Hexham stopping at the main attractions between this stretch.

Haltwhistle is located about 22 miles east of Carlisle – around half an hour by Northern Rail and about 45 minutes by Stagecoach Bus 685. By Car, it takes typically 35 minutes.

Carlisle is well connected by train with big cities in the UK like London, Manchester, Edinburgh and Glasgow.

Hexham lies almost 23 miles west of Newcastle-upon-Tyne. It takes about 40 minutes by Northern Rail and about an hour by Stagecoach Bus 685. By car, it’s about 30 – 40 minutes depending upon the traffic.

Start of the Hadrian’s Wall walk:

We visited Hadrian’s Wall on a day trip from Edinburgh. We hopped on the train to Haltwhistle via a break at the border city, Carlisle. It took us almost 2 hours to reach Haltwhistle, a small market town in Northumberland. From there, we took the bus, AD 122 to reach Housesteads Visitor Centre. The name of the bus is really clever. It takes you back to AD 122 when Hadrian’s Wall was created.

We walked the 8.5 mile stretch from Housesteads Roman Fort to the Roman Army Museum. It would take about 4.5 – 5.5 hours considering you would spend some time in the museum and would stop at places to take in the gorgeous view. There are many ups and downs throughout this scenic path. So, sturdy walking shoes are definitely recommended.

🇬🇧 11 Incredible Things to do on Hadrian's Wall

1. Housesteads Roman Fort - a must visit attraction on Hadrian's Wall 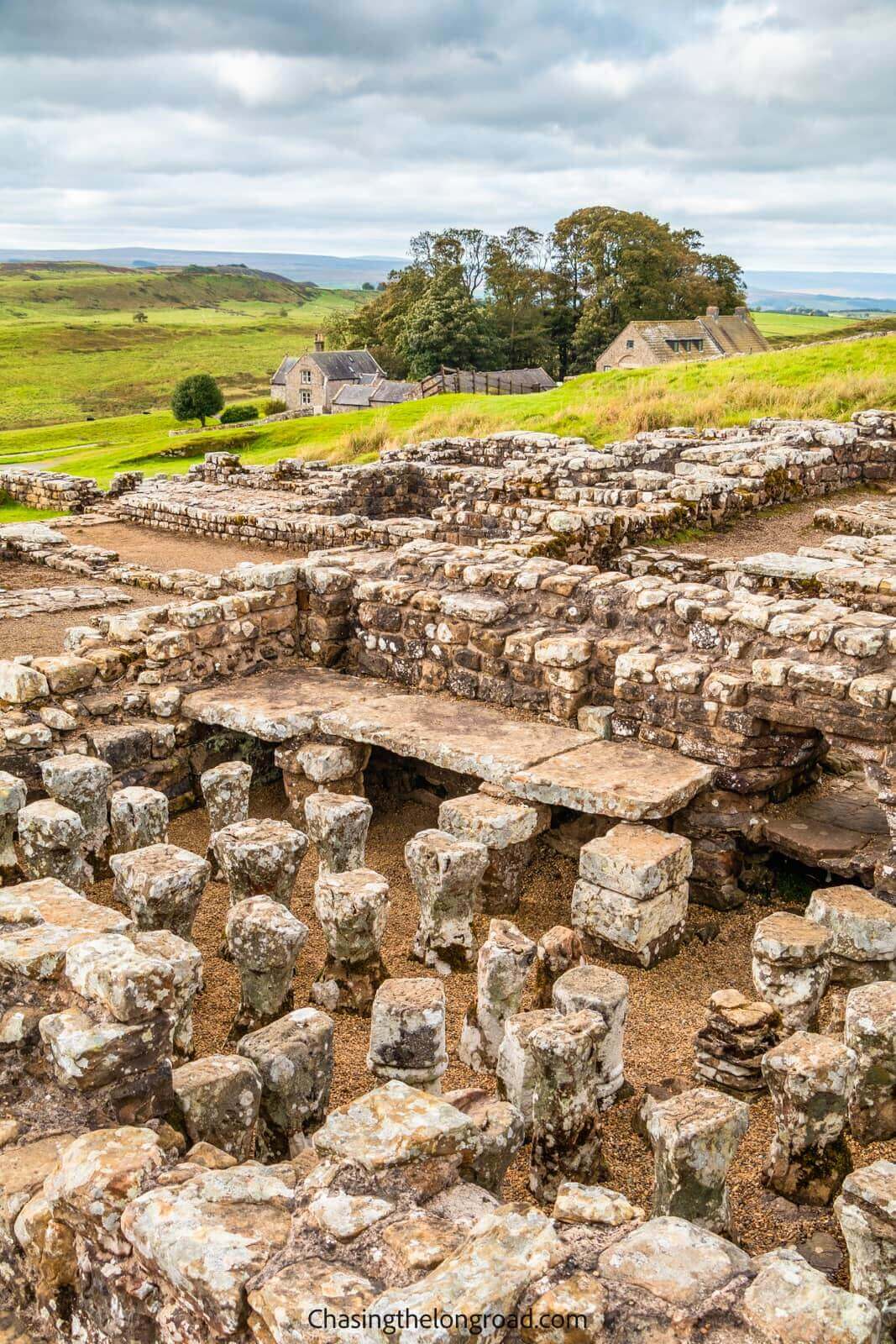 Bus AD 122 dropped us at the Housestead Visitor Centre. From there, Housestead Roman Fort is about 10 mintues walk.

Housesteads Roman Fort is one of the best-preserved ruined forts on the Hadrian’s Wall. This stone fort was built in AD 124, soon after the construction started for Hadrian Wall in AD 122. This 2.2-hectare huge fort was a garrison stronghold of 800 auxiliary soldiers of the Roman Army in Britain.

You will get to see the ruins of house of the commanding officers, impressive gates, barracks of the soldiers, granaries (horreum), bakehouses (pistrinae), hospital. Plus, You will know a great deal of information about the life of the soldiers who used to live there.

There was a civilian settlement (vici) as well around this fort which had shops, inns, pleasure houses. You will get an amazing view of the vast stretch of the Hadrian’s wall and the surrounding countryside.

Pop into their indoor museum as well which displays some historical artefacts curated from the excavation of this 2000 year old site.

Later in the 1600s, it was the home of the infamous Border Reivers who raided the villages on both sides of the Anglo-Scottish border.

A short walk to the west of Housesteads Roman Fort, you would come across Milecastle 37 on the Hadrian’s Wall path. Milecastles are small forts built at every Roman Mile and housed about 20 – 30 auxiliary soldiers.

There were 80 Milecastles along the entire stretch of the Hadrian’s Wall. Usually, two turrets were placed between milecastles at about one-third and two-third distances. Those served as watch towers on the Roman Frontiers. 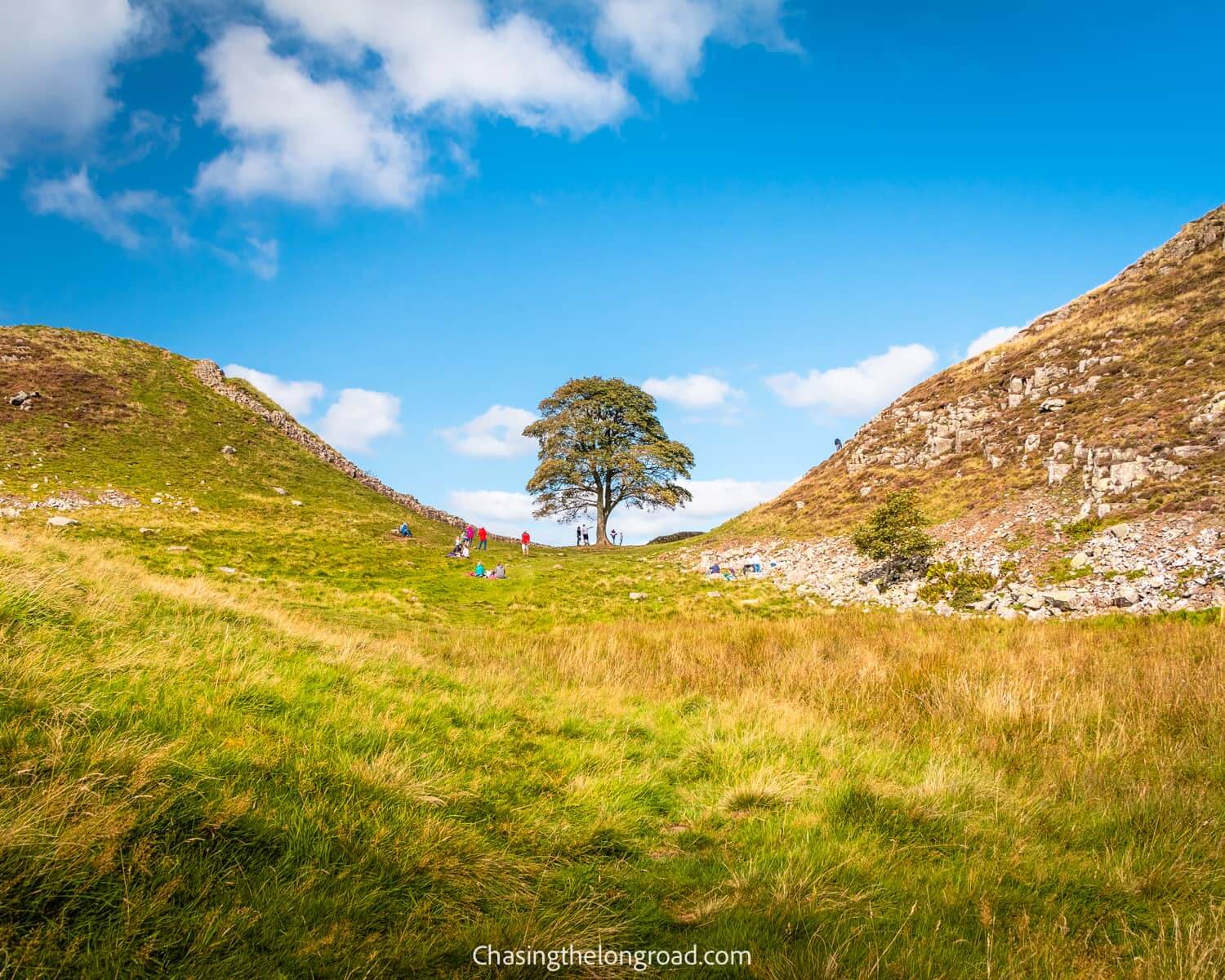 This scenic sycamore tree is a few hundred years old and has won ‘The Tree of the Year’ award in 2016. Sycamore Gap is a great spot to sit and relax for the weary legs and enjoy a picnic with a view. 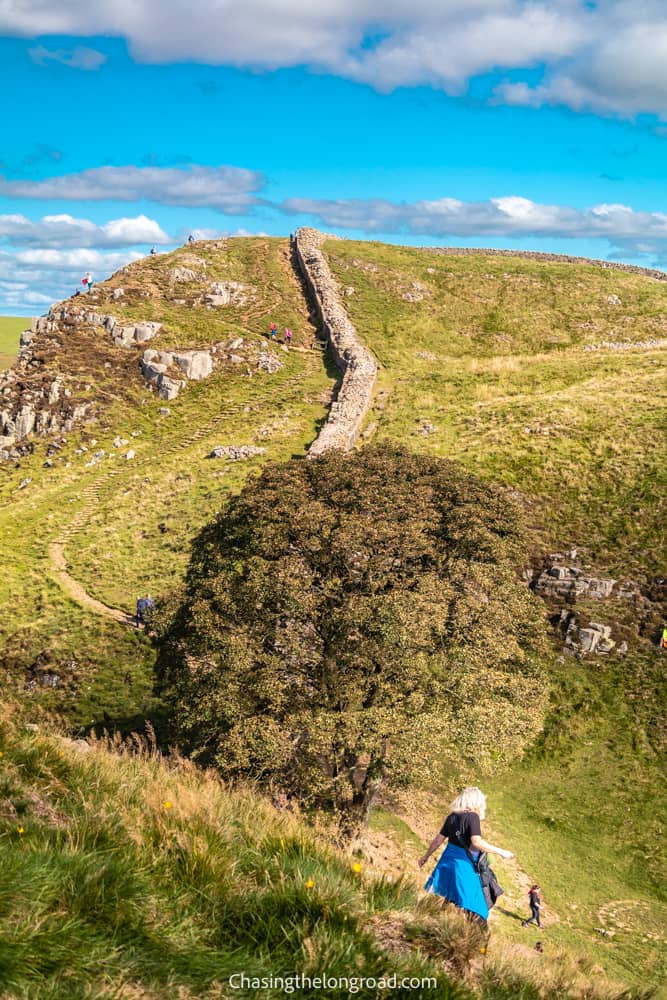 Here, Moumita was almost bitten by a snake (a very small in size though) when she was trying to get a nice vantage point wading through the long grasses. We didn’t have the slightest idea before that snakes could exist in the British climate. So be Careful. 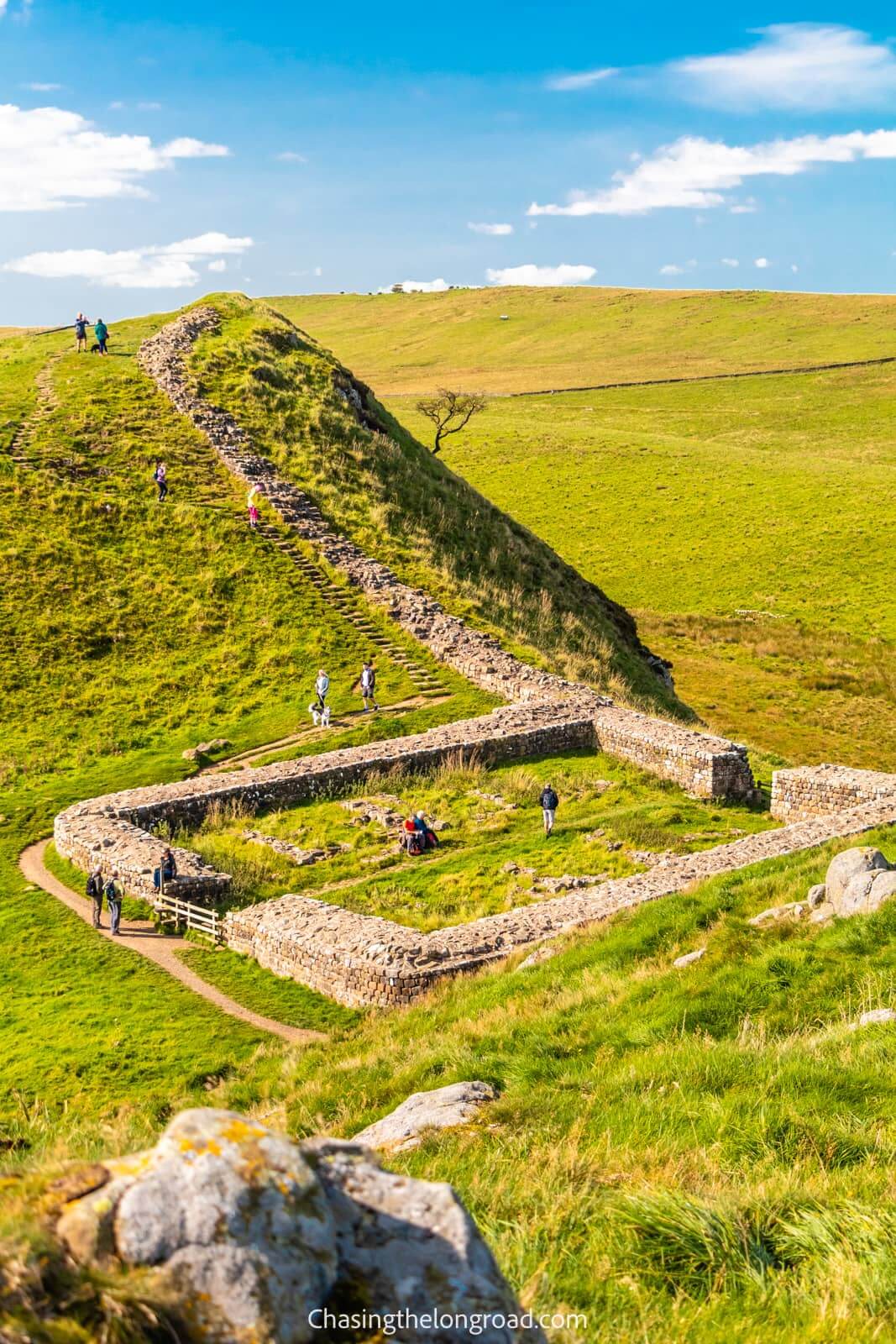 Named after the Great Whin Sill – a prominent geological feature of North East England, the Sill is located about 1.5 miles walk from the Sycamore Gap. Visit this National Landscape Discovery Centre at the heart of Hadrian’s wall and learn about the landscape, culture and history of the Northumberland.

The most interesting part of the building is the Grassland roof which replicates the dramatic landscape of the Whin Sill. Plus, they host a range of interesting exhibits and events throughout the year. If you want to grab a bite or drink, pop into their café, Once Brewed. They have a very good selection of sandwiches and cakes.

You can stay here as well at their YHA. In fact, this landscape discovery centre was built as a collaboration between YHA and Northumberland National Park.

It would probably be hard to squeeze in Housesteads Roman Fort, Roman Army Museum and Vindolanda on a single day. Housesteads is a must-see attraction. If you are not visiting the Roman Army Museum, would recommend visiting Vindolanda. The museum displays some rare collection of 2000 year old artifacts, most notably the writing tablets. Excavations take place every year in summer. If you want to take part in the excavation, visit their website for more details.

Alternatively you can get a saver ticket for £12.15 per adult, which allows you to visit two sites in Hadrian’s Wall –  Vindolanda and Roman army museum. 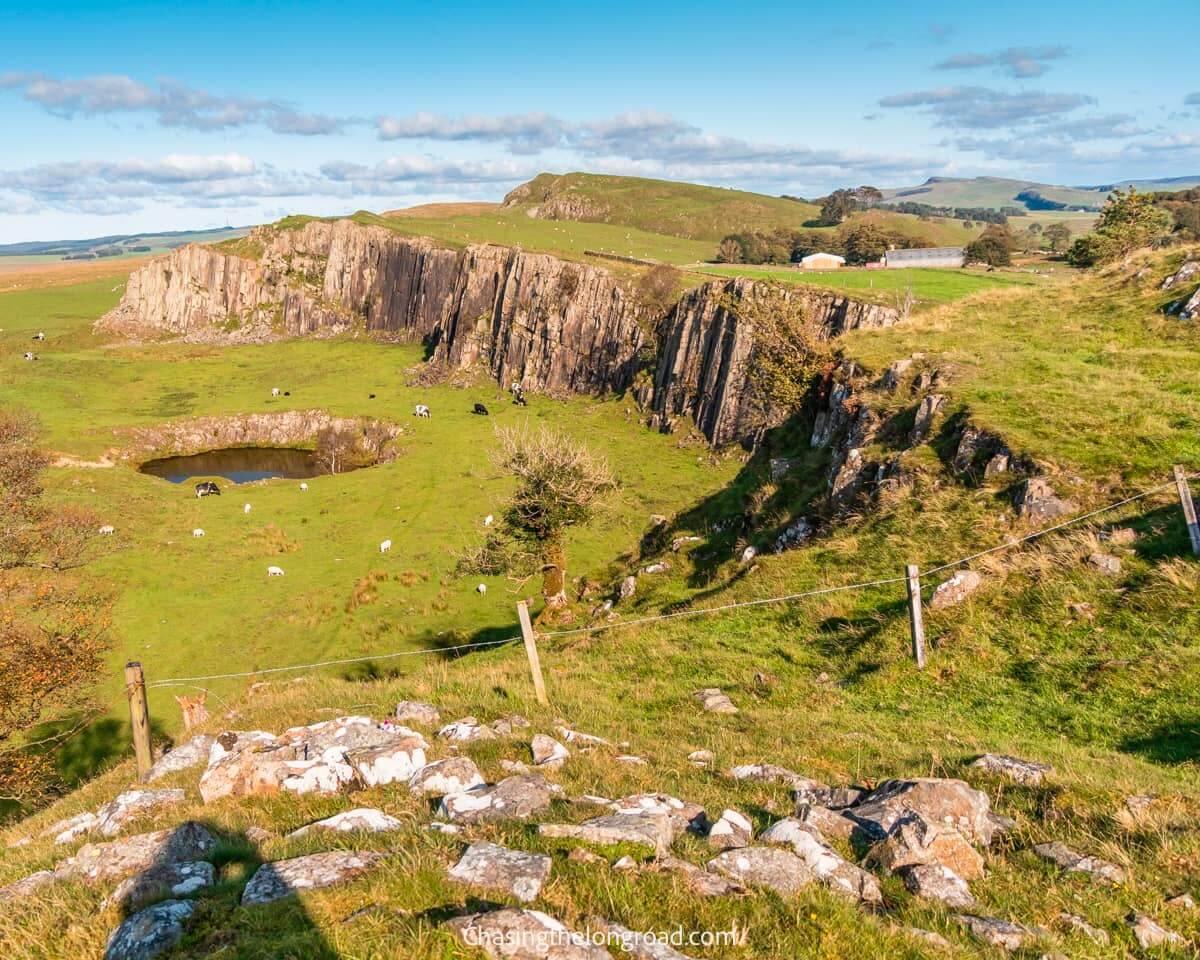 Walltown Crags is one of the most scenic places on the Hadrian’s Wall. This part of the Hadrian Wall makes several twists and turns along the ridge of the Whin Sill. You will get a stunning view over to the long stretch of the wall and the surrounding landscape- simply breath taking! on this stretch of the walk, you would come across probably thousands of sheep grazing around. On your way to the Roman museum from here, you will come across Walltown County Park, where a whinstone quarry was there.

Milecastle 45 is located on the Walltown Crags. The walls of this milecastle were completely robbed and not much remains today except the trenches and the mound. You can see the ruins of associated turret 45A though which is situated about 100 yards east of Milecastle 45.

Roman Army Museum is located near the Walltown Quarry Car Park. Visit this museum and get an experience of the daily life of a Roman soldier. You would get to learn a lot of information about their army structure, training regimes and get to witness their recruitment tent, Hadrian Room. The highlight of your visit would be the 3D film which take you back to the 2000 years ago in the Roman Britain.

Alternatively you can get a saver ticket for £12.15 per adult, which allows you to visit two sites in Hadrian’s Wall –  Vindolanda and Roman army museum.

10. A quick stop in Carlisle 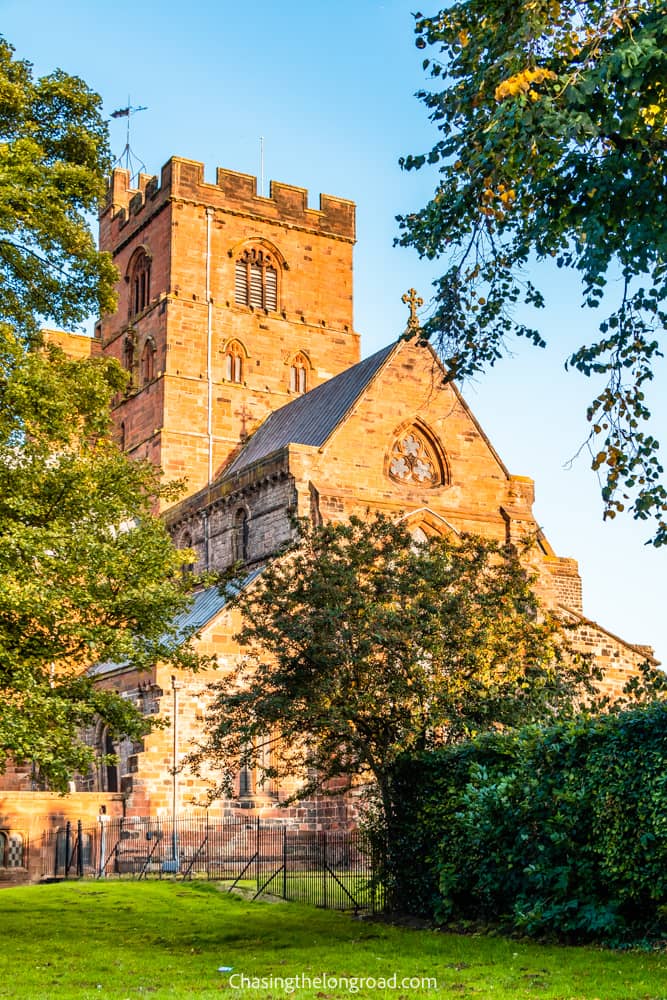 Nicknamed as The Great Border City, Carlisle lies very close to the Scottish Border. This city at the west end of the Hadrian Wall has Roman connection even before Hadrian’s time. Known as Luguvalium to the Romans, they built a fort around AD72 on the site where the current Carlisle Castle is located. Take a ramble around the city and visit Tullie House Museum and Art gallery, Carlisle Castle and Cathedral.

Carlisle is just 30 minutes by train from Haltwhistle. We took a quick stroll in this city on our way to Haltwhistle. But if you want, you can spend a full day in Carlisle. There are a number of things to see and do here.

11. Extend your trip to Newcastle

Newcastle is the city of seven bridges and the party capital of North England. This bustling city has been voted as the third best nightlife destination in Europe. Newcastle has its historic Grainger Town, an amazing waterfront, a Chinatown, a medieval castle. Not only that, some of the best beaches in the country are also not too far from Newcastle. With so many things to do and see, you could easily spend a few days (even a week) in Newcastle.

Hadrian’s Wall Path goes via Newcastle. You can take a train from Hexham and reach Newcastle just in 40 minutes.

Planing a Trip to England?

For further reading on other ENGLAND destinations:

Newcastle |  30 Best Things to do in Newcastle

Durham | 22 Best Things to do in Durham – The Ultimate Guide

Keswick, Lake District |15 Most Awesome Things to do in Keswick

Haworth, West Yorkshire | 12 Most Awesome Things To Do in Haworth

April – October is the best time to visit Hadrian’s Wall. Better to avoid the winter when weather can be very harsh.

Where to Eat in Hadrian’s Wall:

On this stretch there are not too many options to eat. There are cafes at the Sill Discovery centre, Vindolanda. Better to carry some snacks. Sycamore Gap is a nice spot to have a picnic.

Where to Stay in Hadrian’s Wall:

We came here on a day trip. But if you would like a stay overnight, there are a number of Hotels and B&Bs available along the stretch. The Sill discovery centre has a Youth hostel as well.