Avila is located almost 100 Km west of Madrid in the autonomous community of Castile and Leon in Central Spain. This city lies about 1100 metres above sea level and surrounded by the hills of Sierra Gredos. Avila is most famous for its medieval city wall, built in the 11th century by the Christian Kings to protect the city from the Moors.

Not only the city wall, Avila has some of the finest Romanesque and Gothic churches in Spain. In fact, this city has the highest number of churches per capita in the country. No wonder why Avila is commonly known as the City of Saints and Stones. In the 1500s, Avila became a very popular pilgrimage site in Spain in the 16th century because of its association with St Teresa, the patron Saint of Avila. Famous Spanish writer, Azorin once said Avila is the most 16th-century town of all those in Spain. The Old Town of Avila, enclosed by the wall, and its extramural churches are UNESCO World Heritage sites.

Clearly, Avila has a rich history and culture to explore. It also hosts some great ranges of festivals like Medieval Fair, Summers in the Wall. Avila should definitely be on your travel itinerary when you are visiting Madrid. Here is our guide to 12 awesome things you can see and do in Avila.

Arguably, the best time to visit Avila is between June and September, when the weather remains warm, days are longer, and the chances of rain are quite low. But it can be very hot sometimes. Travelling in Spring (Mid March to May) or early Autumn (mid September to October) is not a bad option as well. Weather remains relatively mild, and the accommodation is cheaper being in the shoulder season. However, the days are shorter compared to the summer months.

Avila is around 100 Km west of Madrid. Renfe runs frequent train services to Avila from Madrid Principe Pio train station. The journey takes about an hour and a half. You can buy the ticket in advance from the Renfe website or at the station.

The fastest way to reach Avila is by bus. Jimenez Dorado, a private company, runs bus services from Madrid’s South Station (Estacion Sur). The journey time is about 1 hour and 15 minutes. Travelling by bus is much cheaper as well compared to the train. However, the bus services are less frequent.

So, depending upon what time you are travelling, decide what works better for you.

🇪🇸 15 Incredible Things to do in Avila, Spain

1. Walk along the historic Walls of Avila 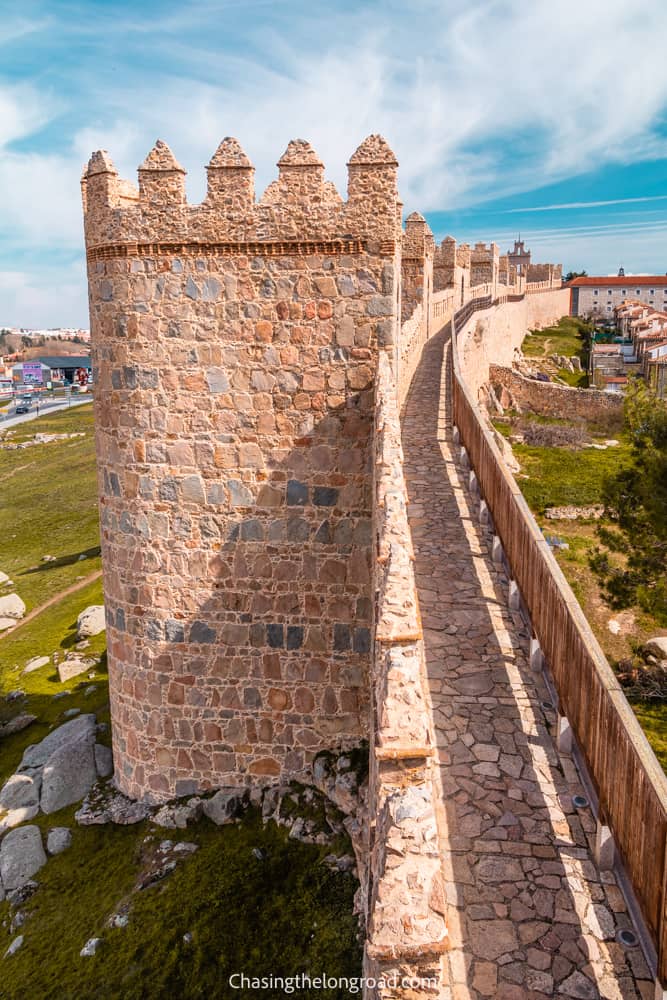 The Walls of Avila is one of the best-preserved medieval fortifications in Europe. Christian King, Alfonso VI ordered to build this defensive wall after the conquest of Avila in the 11th century from the Moors. Moors were the medieval Muslim Rulers in the Iberian Peninsula.

The 2.5 Km stretch of the impressive stone wall encloses the historic old town of the city. There are about 88 semi-circular defensive towers on the 2.5 km long stretch of the wall. The average height of this wall is 12 metres with an average thickness of 3 metres. A moat was there as part of the defence system, but it no longer exists today. It took almost ten years to build this iconic fortification of Avila. Both the Christian and Mudejar artists took part in the construction. 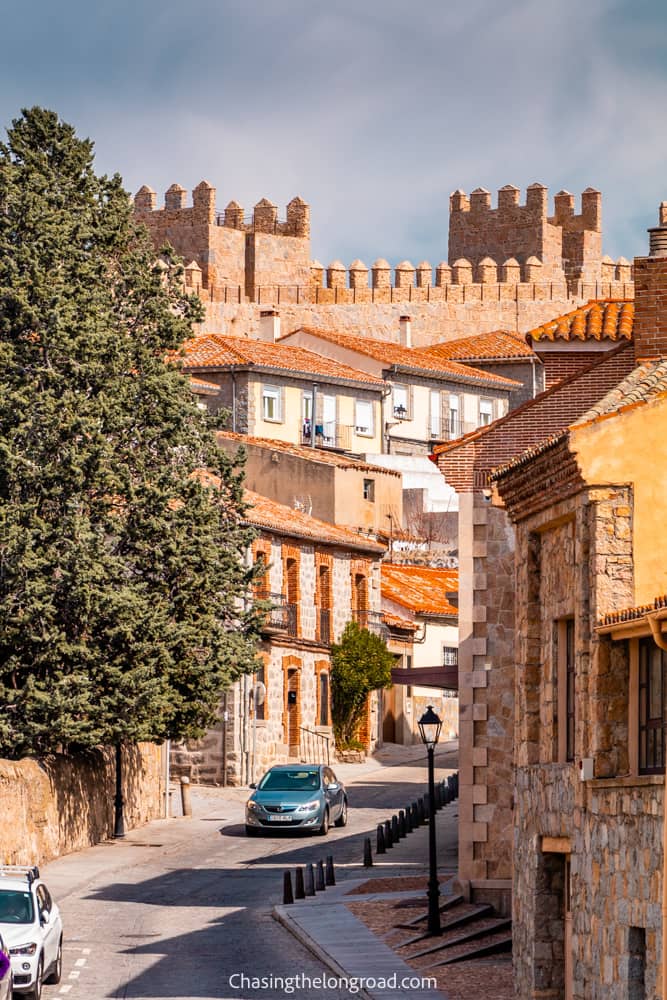 There are nine different gates on the wall to access the ancient walled city. The most impressive ones are Puerta de San Vicente (means Gate of St Vincent) and Puerta del Alcazar (Gate of the Fortress). They have 20-metres high twin towers connected by semi-circular arches.

Walking along the historic walls is a must-do thing in Avila. Half of the wall is accessible for a walk. On your walk, climb some of the towers. You would get a gorgeous view of the wall and the city. At night, the wall looks spectacular with all the lights. The general entrance fee to the wall is 3.50 Euro per adult.

2. Take in the view from Los Cuarto Postes

Los Cuarto Postes (or the Four Posts) is one of the top attractions in Avila. This 16th-century religious monument shapes like four Doric columns with a canopy. A granite cross stands in the middle.

There are a couple of legends about Los Cuarto Postes. The popular story goes that Teresa of Avila and her brother, Rodrigo were leaving Avila as children to spread Christianity to the land of infidels. This is the place where their uncle prevented them from going. Also, years later, after being expelled from Avila due to religious differences, St Teresa left her sandals at this spot and said she even won’t take the dust from Avila with her. 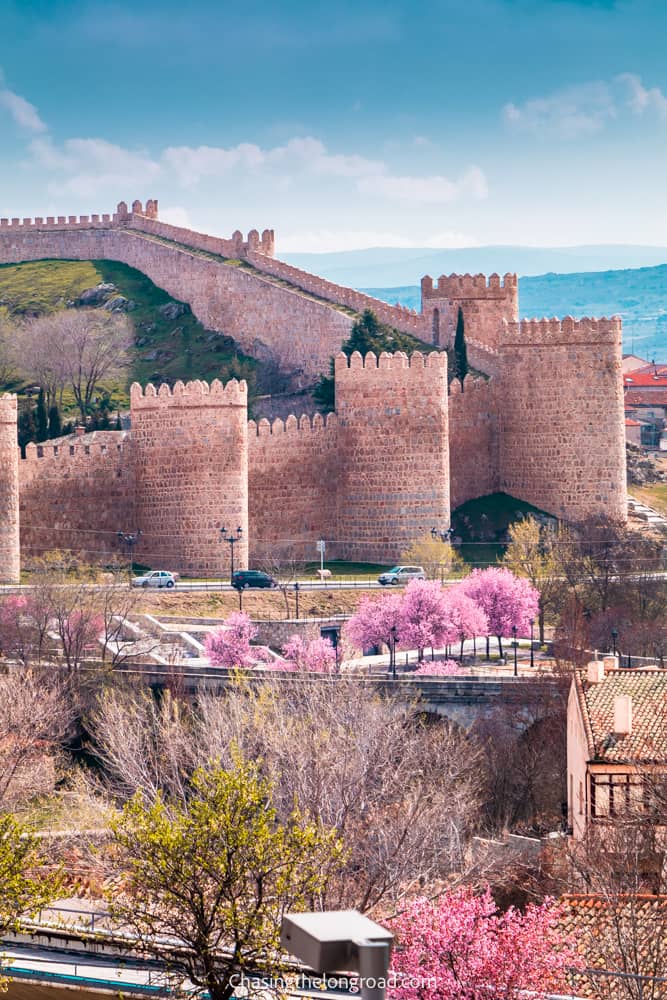 Los Cuarto Postes is located about 1.5 Km outside the Wall on the other side of the River Adaja. Once here, you would get a smashing view of the city wall, particularly in the evening, when the vast stretch of the city wall is fully lit up. It’s a great spot to watch the sunset as well.

The architecture of Avila cathedral has French influences. There is striking resemblance with the Basilica of Saint-Denis, considered the first church built with proper Gothic architecture.

Inside the cathedral, you would find an eclectic blend of Romanesque and Gothic styles. There are some lovely stained glass windows. Entrance fee to the cathedral is 6 Euros per adult.

Basilica de San Vicente lies just outside the city wall in Avila. Founded in the 11th century, this imposing church is considered one of the finest Romanesque church in Spain.

This Basilica is dedicated to Saint Vicente, Sabrina and Cristeta – three siblings martyred during the reign of the Roman Emperor, Diocletian. The construction began in the 11th century at the place where the saints got buried. It took almost two centuries to build the Basilica after the construction work got halted several times.

Step inside this church and marvel at the ornated interiors. You will find the cenotaph of the saints constructed by Giral Fruchel, a famous French artist. Also, learn some interesting stories about a Jew, who became converted after being attacked by a snake. The entrance fee is 3 Euros per adult.

Plaza del Mercado Chico (The Small Market Square, also known as the Plaza Mayor) is a market square at the heart of the Old Town of Avila. Three sides of this medieval square have arcaded buildings. Important landmarks around this square are the Town Hall and San Juan Church.

There are many cafes and restaurants in this square – a nice spot to enjoy a drink and see the world go by. Also, take a ramble along the photogenic streets around this square.

Real Monasterio de Santo Tomas (The Royal Monastery of St Thomas) lies outside the city wall. Catholic Monarchs – Isabella I and her husband, Ferdinand II – commissioned to build this monastery in the 1400s to commemorate St Thomas Aquinas, a Dominican friar.

Iglesia de San Pedro Apostle (The Church of St Peter the Apostle) is located outside the city wall, looking over Plaza del Mercado Grande (Big Market Square). This Romanesque church was built in the 1200s. The façade of the church has a rose glass window.  This church is one of those extramural churches that UNESCO declared a World Heritage site. 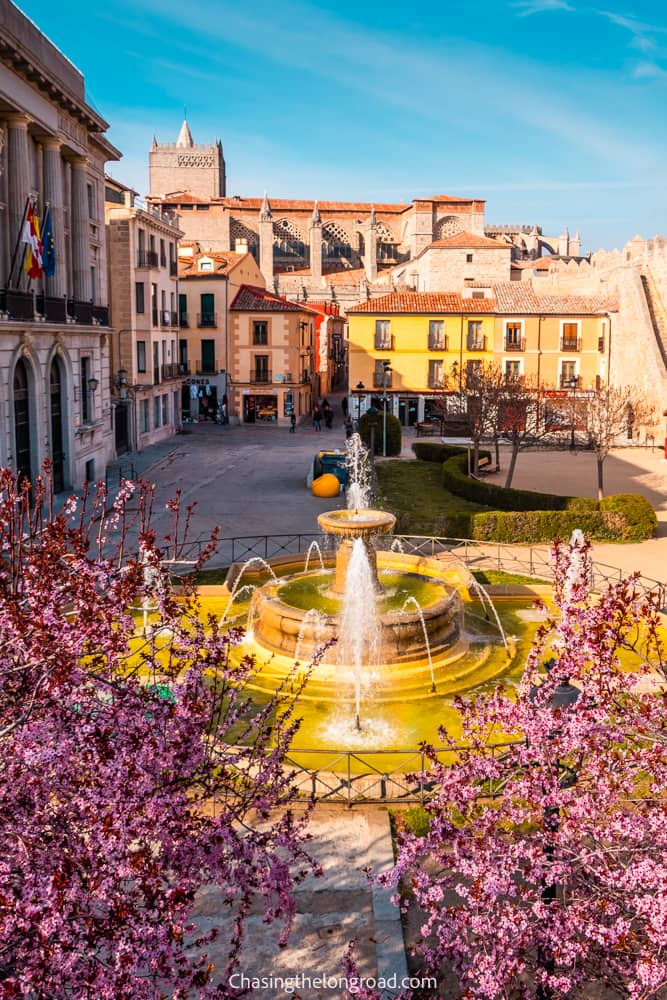 Plaza Adolfo Suarez is a small public square near the Puerta del Alcazar gate on the city wall. This picturesque plaza is named after the past prime minister of Spain, Adolfo Suarez, born in a small town near Avila. He played a very important role in the Spanish transition to democracy in the 1970s after the dictatorship of Francisco Franco.

There is a statue of him in the centre of the square. His summer home near the ‘Puerta de Santa Teresa’ gate is a luxury hotel, ‘La Casa del Presidente’.

Built in the 1600s, Convento de Santa Teresa celebrates the life of St Teresa, the patron saint of Avila. Located near the ‘Puerta de Santa Teresa’ gate on the city wall, this church stands at the place the saint was born. The underground crypt houses the museum of St Teresa.

Step inside this church and admire the elaborate chapel. There you can find a baroque sculpture of the saint. Also, visit the relics of Saint Teresa, which includes her sandal, a finger from her right hand.

10. Try out the local cuisine in Avila

The speciality of Avila is chuletón de Avila, a veal steak. The city is also famous for Judias del Barco, a type of large beans, locally known as pipos. These legumes are served in a stew with chorizo and trotters. If you have a sweet tooth, try out Yemas de Santa Teresa – a cake made from flour, egg yolk and sugar.

When we were in Avila, we went to a tapas restaurant. Every alcoholic drink you order comes with a small tapa (‘ir de pinchos’) like legume soup, potato omelettes, tripe, tuna pies. That’s a great way to taste small portions of multiple dishes.

Built in the 1500s, Palacio de los Verdugo (The Palace of the Executioner) lies on Lope Nunez Street. This palace played a defensive role in the 16th century. The façade of this building is very simplistic in design, flanked by two towers on each side. Next to the left tower of the Façade, lies a stone boar of the Vetonic period. Inside the building, there’s a lovely patio with floral arcades and coffered ceilings.

Segovia is situated at about 40 miles northeast of Avila. This historic city is notable for the Roman Aqueduct – an engineering marvel dating back to the first century. It’s also home to a fairytale fortress (Alcazar), built in the 12th century during the reign of King Alfonso VIII. Another architectural gem of the city is Segovia Cathedral – the last Gothic cathedral in Spain. Not just the grand architectures, Segovia also boasts of its culinary heritage – cochinillo or Suckling pig. The city centre of Segovia is a UNESCO World Heritage site.

If you are in the central Spain, you will have to visit El Escorial – the historic royal residence and monastery in Spain at the foothill of the Sierra de Guadarrama. Located at about 38 miles east of Avila, it would take about 45 to 50 minutes to come here by Renfe train. Considered the largest Renaissance building in the world, El Escorial is a world heritage site.

Explore the Courtyards of the Kings, Basilica, Pantheons, library, museum and the garden – the entire complex consists of a huge area of about 7.5 acres. It would take almost 3 – 4 hours to explore El Escorial.

14. Attend a festival in Avila

If you are in Avila in early September, you are in luck. You would be able to attend the medieval fair where the city steps back in time. It’s one of the main festivals in Avila. You would see many people dressed as monks, kings, knights and friars. Plus, there are several stalls selling cheese, artisan crafts, incense, jewellery. Throughout the year, a range of other festivals (like Summers in the Wall, Illumina Avila) happen in Avila.

Located in Central Spain, Madrid is the capital of Spain – you already know this right? Well, Madrid is nearly 68 miles southeast of Avila. Like most of the Spanish cities, Madrid is so vibrant and full of life. Climb up TV Tower and get a 360-degree smashing view of the city. Explore the bustling Plaza Mayor, Puerto del Sol, taste some local produce at Mercado San Miguel. Take a stroll along Gran Via, visit the Royal Palace, the world-renowned Prado Museum. And of course, you would have to pop in to Chocolateria San Gines – their churros are simply unreal!

Planing a Trip to Spain?

For further reading on other SPAIN destinations:

🇪🇸  Segovia | A Day Trip to Segovia, Spain from Madrid – 18 Best Things to do

🇪🇸  Avila |A Day Trip to Avila, Spain from Madrid – 15 Best Things to do